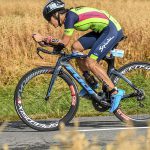 The assessment of physical performance during the season is of major importance to determine if we are obtaining the expected benefits with our training program. Moreover, being aware of our fitness level is useful to know at which intensity should we compete to achieve the greatest results. One of the most popular ways of assessing physical performance is the so-called effort test (or ergometry). There are several important markers during this type of tests (e.g., maximal oxygen consumption) that are related to endurance performance, with the lactate threshold being one of the most famous.

The lactate threshold is usually defined as the maximum workload that precedes an exponential rise in blood lactate values during an incremental test. This intensity corresponds to the point above which most of the energy comes from the metabolism of glucose through the “anaerobic pathway”, and thus fatigue occurs much sooner (blood pH decreases and glycogen stores get emptied). Although the assessment of the lactate threshold is useful, it requires laboratory tests for determination, which hinder its regular use in ordinary athletes. For this reason, more practical field test-based markers that can be conducted regularly with a power meter have been proposed as surrogates of laboratory-based ones.

One of the most commonly used field test methods for the estimation of the lactate threshold is the functional threshold power (FTP), defined by Allen and Coggan as the highest power that can be maintained in a semi-steady state. Briefly, these authors proposed that the FTP corresponds to the highest intensity that can be maintained for around 60 minutes, which would be similar to that associated to the lactate threshold. However, due to the physical and psychological difficulty of regularly performing a 1-h maximum test, the FTP is usually computed by subtracting 5% from the mean power achieved during a 20-minute time trial (e.g., 300 W during the test correspond to an FTP of 285 W).

A recent study assessed the validity of the FTP as a surrogate of the lactate threshold. For this purpose, 20 cyclists who trained at least 4 hours per week performed an incremental laboratory test and a 20-minute time trial for the determination of their FTP. Results showed that the FTP was overall similar to the lactate threshold, being both markers almost perfectly correlated. However, further analysis demonstrated that, whereas in highly trained cyclists there were no differences between both markers, in recreational ones the FTP slightly underestimated the lactate threshold.

In summary, the assessment of the FTP through a 20-minute time trial can be a practical and valid way of estimating the lactate threshold without the need of performing a laboratory test. It is important to note, however, that the accuracy seems to be better in those cyclists with a greater performance level, but in lower trained ones it might be better not to subtract a 5% to the mean power achieved.